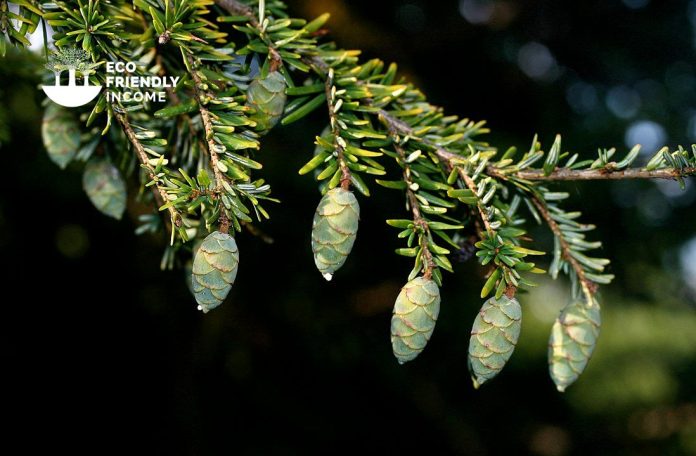 A field guide on how to identify and propagate Eastern Hemlock (Tsuga canadensis), a hardy, shade-tolerant tree that is native to eastern North America.

Eastern hemlock leaves are needle-like, have a linear shape, with an entire margin (smooth), and grow in opposite arrangements on the stems.

Eastern hemlock bark is a rough, grayish-brown bark that is deeply furrowed, especially as the tree matures. It is slightly scaly and often has patches of lichen or moss. The bark has a distinctive aroma when crushed, which is often compared to the smell of gingerbread.

Eastern hemlock cones are small and round, typically measuring between 0.5 and 1 inch in length. They are a dark green color with a fuzzy texture but turn brown over time. The cones have a long, narrow tip and are often clustered on the upper branches of the tree.

The scales are rounded, with a short, sharp spine on each. The seeds inside the cone are small, light brown, and winged.

The cones typically appear on the trees in the late spring or early summer.

Eastern hemlock trees are typically found in moist, cool, and shaded areas, such as along the edges of streams or rivers, in old-growth forests, and in sheltered ravines.

If you see these trees, there’s a chance eastern hemlock is growing nearby:

Eastern hemlocks prefer acidic, nutrient-rich soils and can tolerate some standing water. They are also common in moist, shady areas, such as bogs and wet meadows, and along the coast in salt marshes.

You can find them growing in the Eastern Forest-Boreal Transition, Great Lakes & Acadian Forest ecoregions.

They provide food, shelter, and habitat for a variety of species. The needles and twigs of the eastern hemlock tree are an important food source for deer, rabbits, and other mammals.

The tree’s root system and fallen needles provide valuable nutrients to the surrounding soil, benefiting all wildlife in the area.

Eastern hemlocks also provide valuable habitat for aquatic species, including fish and amphibians, by providing shade and shelter in streams and rivers.

There are two techniques that work if you want to propagate eastern hemlock:

Since growing eastern hemlock by seed is easier, that’s what we’ll focus on.

Although if you are interested in cuttings, we have a great article with strategies that will help you succeed.

Check out: How to Propagate Plants: The Supreme Guide to Plant Cuttings.

How to Propagate Eastern Hemlock (Tsuga canadensis) by Seed

Conifers are all relatively simple to propagate by seed, and the seeds are pretty straightforward to harvest.

If you have access to eastern hemlock trees, I recommend you just harvest cones yourself. That way you have fresh seeds you know will germinate.

If you don’t, no worry, you can order some eastern hemlock seeds online at MountRoyal Seeds.

Now let’s take a look at how you can harvest them:

Conifer seeds are inside their cones, they are in between the cracks when the cones open.

To get your seeds, all you need to do is harvest some cones, let them dry (they will open up naturally), and knock out the seeds.

Now for eastern hemlock, timing is important for harvesting.

The cones typically open up naturally by fall, and you need to get to them before they do. If you’re too late, the winged seeds will have flown out.

So for us to replicate this, we have to give the seeds the same conditions they would have if they were outside.

Here’s how to stratify:

This will perfectly simulate the conditions seeds go through in the wild, and give you great success in germination.

After this, sow them into a mix of sand and peat moss, water them well, and cover them with plastic wrap to maintain moisture.

Seeds should germinate within a week.

A: You can certainly grow hemlock in full sun, it’s also tolerant to shade to a pretty high level.

Q: Is eastern hemlock the same as Canadian hemlock?

A: Yes, Eastern Hemlock and Canadian Hemlock are the same tree, their scientific name is Tsuga canadensis.

A: Yes, in some places, like Minnesota they are quite rare and even imperiled. Eastern hemlock is found growing naturally only in a small range.

Q: Where is the oldest eastern hemlock tree?

A: Eastern hemlocks, which thrive in shade and are known for their longevity, can reach up to 53 m (174 ft) in height. A record-breaking specimen was found in Tionesta, Pennsylvania, and was estimated to be 554 years old. The average height for this species of tree is 31 m (102 ft).