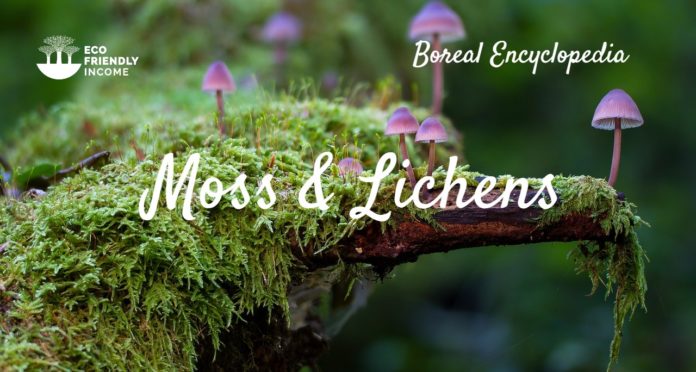 The land of the mosses, that’s what we call our boreal forests here. Why? Because moss covers up to 97% of Canada’s boreal forest surface.

As much as 20% of our forest biomass comes from moss & lichens, which is massive for an organism we know so little about.

Moss & lichens also play a significant role in the ecosystem, they are an important source of food for boreal forest mammals & insects. Additionally, they colonize rock surfaces, slowly break them down, and add new minerals to the soil.

Their life and death cycle also add much organic matter to the forest floor. In truth, decomposed mosses and lichens create significant sources of new topsoil.

Black spruce saplings, for example, really like to grow in fresh or decomposing moss.

Did you know? Mosses & Lichens are old… I mean really old!

Did you know the earliest “moss” species began appearing in the Ordovician Period? That’s as far back as 443 million years ago!

They are some of earth’s very first terrestrial plant life!

And later in earth’s history, during the Permian Period, land masses all fused into a supercontinent called Pangea. That’s why many moss & lichen species that evolved back then are found all over the world today, even as far as Australia.

Did I pique your interest? This sure got me…!

So here’s what you can expect to read in this article:

We will cover these topics on boreal forest moss & lichens:

Alright, let’s delve into the fascinating world of mosses & lichens!

What’s the Difference Between a Moss and a Lichen?

First, the word moss is often used in a general way but mosses are actually sub-families of a type of organism called a bryophyte.

Non-vascular organisms like bryophytes are often classified into three divisions:

Lichens, on the other hand, are a completely different thing. They’re actually not even plants! Lichens are in fact, a symbiosis between two organisms: a fungus and algae.

What we see when we look at lichen is the fruiting body of the fungus, but down to the microscopic level, the fungus is colonized by cyanobacteria.

The relationship is mutually beneficial. The cyanobacteria produce organic carbon compounds through photosynthesis, and in return, the fungi give the algae/bacteria a body to live on outside of water.

There’s a variety of species in each division, let’s take a look:

The Most Common Boreal Forest Mosses

Mosses have two important visual characteristics you can look at to differentiate each species:

These two characteristics of mosses vary from species to species. Some species look ridiculously similar, but if you carefully look at these two features, you will be able to differentiate them.

How does moss reproduce?

Moss are some of the oldest organisms on the planet, their reproductive system is efficient. They can reproduce sexually and asexually.

Now let’s look at some of the most common boreal forest mosses of the bryophyta phylum:

Sporophytes: Red-brown, up to 4cm tall. The capsules are slightly inclined and curved, they have strong, visible groves.

Stems & Leaves: Loosely erect or erect-spreading, sometimes curved and pointed in 1 direction. Leaves are no more than 3mm long.

Stems & Leaves: Light to yellow-green color, spread over large areas of ground with rhizoids. Leaves up to 1cm long, spreads near perpendicular to stem.

Broom mosses are one of the iconic boreal forest moss & lichens.

Sporophytes: Can have from 1-5 stalks for each plant, 2-4cm long. Inclined, and curved.

Stems & Leaves: Long, narrow, pleated lengthwise. Leaves are all turned to the same side in a crescent shape.

Sporophytes: Long red stalks (1.5-3cm). Twisted from side to side, capsules (2-3mm) have a strong curve almost horizontal.

Juniper hair Caps are one of the iconic boreal forest moss & lichens.

Stems & Leaves: Wide-spreading masses; dark- to bright-green or yellowish-green; up to 10 cm tall. Stem leaves egg- to heart-shaped, with a long tapered and pointed tip.

Stems & Leaves: Medium-sized to large, reddish to reddish-purple, sometimes light green when growing in shade; branches in clusters of 4 – 6, with 2 – 3 spreading away from the rest.

Liverworts are flowerless plants that produce spores in small capsules. They often appear in these two forms:

Just like mosses, liverworts have rhizoids. These are anchoring structures, superficially root-like, but without the absorptive functions of true roots.

Cells of about 90% of liverwort species contain oil bodies. The compounds found in these oil bodies are various terpenoids and the amount produced varies between species. They are useful for identification.

In many cases the functions of these compounds are unknown, but they do give distinctive aromas or tastes to various liverworts.

Liverwort sporophytes can appear as regular stalks with a capsule at the end or in other unique ways. For example, some sporophyte of genus marchandia appears as umbrella-like structures, where the spore capsules are formed on the undersides.

Liverworts found in the boreal forest:

Hornworts are flowerless, spore-producing plants that typically produce their spores with long horn-like antennas. These develop from gametophytes that are often flattish green sheets just like liverworts.

The male and female gametes (sperm & egg) are produced on the thallus (those green sheets). These fertilized eggs will develop into the sporophyte (the tapering, long, horn-like structure).

Hornworts don’t have the slime papillae that are found in many liverworts, yet have the ability to create mucilage in almost any cell.

Since bryophytes don’t have the traditional root systems of other plants, the mucilage (slime) acts as a way to store water and food from the surrounding environment. The mucilage also plays a big role in creating the right environment for sperm and egg fertilization within the archegonium.

All hornworts have Nostoc cavities. A special mucilage cavity where a microorganism called nostoc can enter. Once inside, this microorganism multiplies and provides the hornworts with nitrogen, in exchange for carbohydrates, forming a symbiosis.

Hornworts found in the boreal forest:

Lichens are a combination of two organisms, a fungus, and algae. The fungus is the dominant partner, the one we visually see, and the algae are microscopic.

The algae are often green or blue algae, a type of cyanobacteria. These two types of bacteria are often present at once on lichens.

This relationship between the two organisms is symbiotic: Fungus cannot naturally photosynthesize, they lack the green pigment chlorophyll, but algae can.

So in this way, we can see it like the fungus is doing a sort of ‘agriculture’ with the algae. It provides the algae with a body and protection outside of water, which benefits the algae and in exchange the fungus receives nourishment.

Interestingly, this interesting relationship allows both species to live in environments they wouldn’t normally live in. For example a hot desert, a cold boreal forest, or even a completely exposed surface.

When dry, a lichen will take the color of the original fungus, it can be light or dark grey color. But that’s a whole different thing when they’re wet.

When lichens are wet, their true colors shine. This is because the fungal cells in the upper cortex become transparent and the colors of the algal or cyanobacterial layers can shine through.

The colors of the blue and green algae will become much more apparent. True lichen colors can range from white to blue, green, brown, orange, and shades of grey.

Lichens found in the boreal forest:

Star-tipped cup lichen are some of the iconic boreal forest moss & lichens.

There are records of mosses used as medicine dating back to ancient times. Although marginal considering how hard they are to identify. Their size is small and they often lack fruiting bodies or significant organs to attract attention.

Additionally, many mosses have no smell or flavor, with the exception of some liverworts that contain aromatic oils.

For a long time, mosses, in general, were overlooked as medicinal plants, but they have been given a chance again in the last 200 years.

Bryophyte interest was sparked up again in the late 1800s, studies were made on a variety of species. Interestingly, at least 16 species were confirmed to have medicinal properties.

Here are the confirmed medicinal properties of some of these mosses. I’ve also linked the image on this article of each relative plant listed below.

This is in no way medicinal advice, it’s a representation of researches done on these mosses. Please consult a doctor before trying any of the plants below.

Moss & lichens have other uses in sectors like gardening, and home decor.

It could be profitable to grow them artificially to sell to gardening centers. They make great cover crops in gardens, benefit other plants, and beautify your garden.

Additionally, as rooftop gardening grows in interest, the demand for mosses is likely to rise. A variety of mosses and lichens can grow in open areas like rooftops and easily greenify our cities.

We could only draw advantage from knowledgeable urban designers sharing their thoughts on moss use in city landscaping.

It’s been wonderful to see many databases online documenting the hundreds of varieties of these wonderful ancient plants. My home province of Quebec is home to such conservation programs, they bring awareness to the curious like me and list all biodiversity hotspots.

Evidently, to save these species, and many others, we must continue to create and protect nature reserves. It’s certainly a thing that’s easier said than done, but public awareness can certainly help in the execution of these programs.

Each species have an intrinsic value which cannot be disputed, even the smaller plant species like mosses and & lichens do.

Hopefully, the wonderful world of boreal forest moss & lichens inspired you as much as it inspired me! May we all do our part to preserve earth’s wonderful biodiversity.