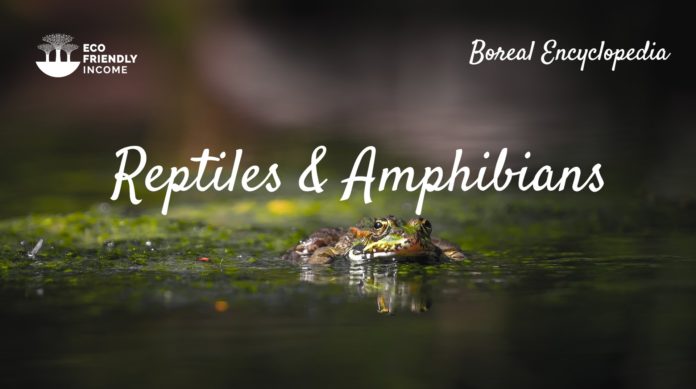 Given that boreal forests are found within the coldest climate zones on earth, not many reptile or amphibian species have managed to adapt here.

Two important factors are against reptiles and amphibians living here:

But despite the odds being against them, nature has crafted some nifty workarounds for these species.

During winter, some species slow their metabolism down to a near halt, while others simply accept being frozen alive!

And to solve the second problem, reptiles, and amphibians here just mate as fast as possible, and in extremely large numbers.

It’s simple math, a higher number of offspring have higher chances of making it through winter. Additionally, there’s even a species of reptile that’s adapted to give live birth!

Below, I assembled all the known reptiles and amphibian species found living in boreal forests worldwide.

Most sources online or in books tend to separate these species between the Canadian Side and the Eurasian side. But when you look at it, they’re from the same biome, the boreal forest. I think it’s time we unite them all under the same umbrella.

Note: Canadian species are fairly well documented in English, the Eurasian species were much harder to find. The Eurasian species listed below were found by cross-checking Russian and European archives. Their habitat range was confirmed by consulting their most up-to-date maps.

Keep in mind there is a margin of error. Climate change or habitat destruction might have spread/reduced the range of certain of these species. 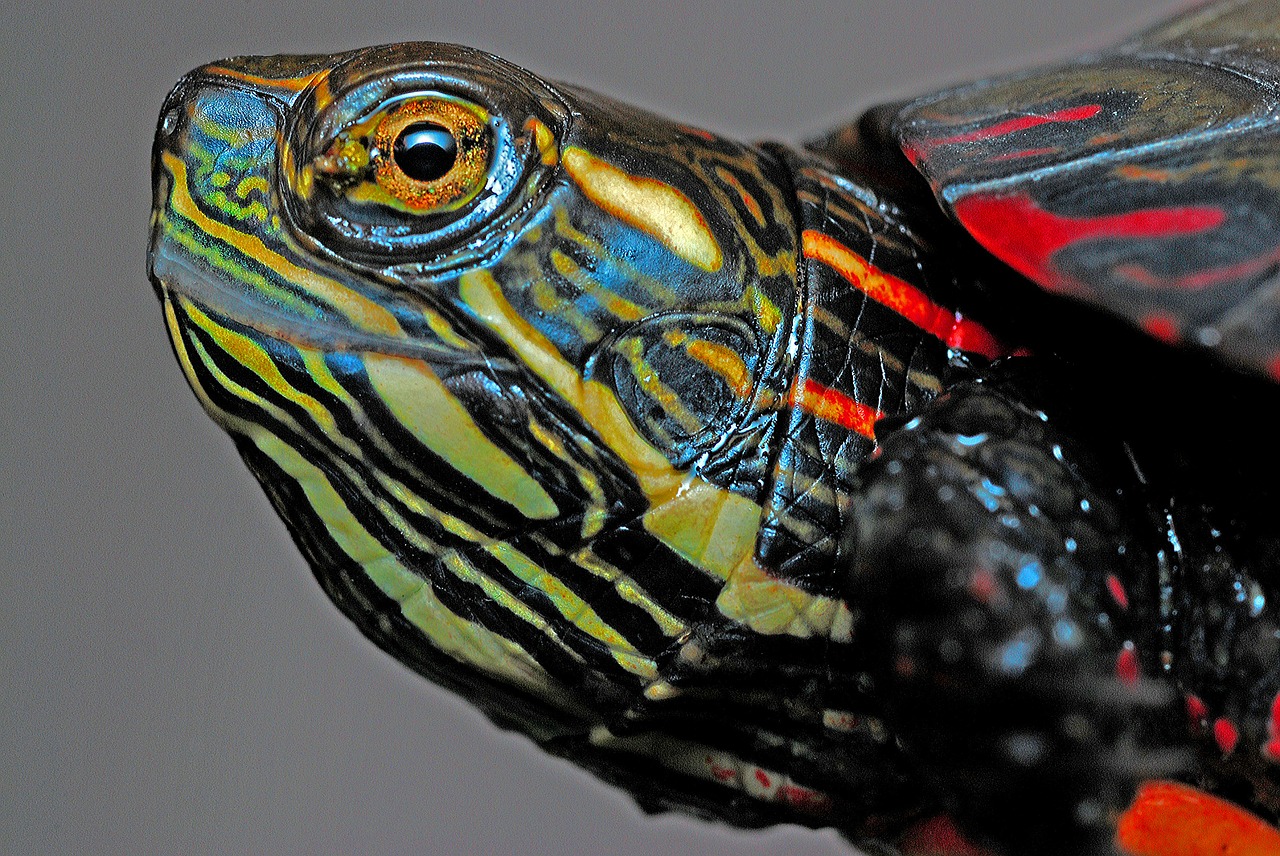 Turtles Found in the Boreal Forest

Only 3 species of turtles are found in boreal forests worldwide.

How Turtles Survive Winter in the Boreal Forest

Snapping and painted turtles are known to hibernate through winter (more accurately called brumation). But did you know that their metabolism doesn’t completely shut down?

People have observed snapping turtles move under the ice in the middle of winter, even despite the lack of oxygen. How? It’s because they have the ability to shut down their non-essential senses, but others, like eye sensitivity, remain. Which means when favorable conditions appear, their eyes pick up light, then parts of their nervous systems turn back on.

When a mid-winter thaw happens, it’s most probable that turtles wake up at the same time to enjoy the conditions.

And when spring arrives for good, snapping turtles who’ve slept all winter without waking up can sometimes come out carrying many layers of topsoil on their back.

Snakes Found in the Boreal Forest

10 species of snakes are found living within boreal forests worldwide.

How Snakes Survive Winter in the Boreal Forest

Snakes in cold climates have a very rough life. Technically, they could only survive temperatures below zero for no more than a couple of days. Freezing for a snake means certain death.

When temperatures start to get cold, snakes living in boreal forests will take measures to prepare for winter.

First, they will stop eating. This is because digestion requires a certain amount of body heat. When the temperatures are too cold, the food in their stomachs won’t be digestible. This can actually cause a big problem for a snake because the food will start to rot and their insides along with it.

Second, snakes will go in search of a new den. One that is at least below the winter’s frost line. Areas like this aren’t so easy to find, and ideal locations will often have large masses of snakes.

Finding a den below the frost line is really important for their survival but it doesn’t ensure complete survivability. It’s said that during especially cold winters, roughly a third to half of snakes populations can die (Rossman, Ford and Seigel 1996, 79). Of course, snakes going through brumation stay somewhat vigilant to their surroundings. They’ll know if it gets too cold and will try to go even further below the ground. It’s not always possible though, that’s why especially cold winters have decimated large populations of snakes.

Snakes are carnivorous, they will eat almost anything that they’re able to overpower. They feed on slugs, earth words, nightcrawlers, leeches, amphibians, minnows, and small boreal forest mammals.

Lizards Found in the Boreal Forest

Surprisingly, there is one lizard that has managed to adapt to the boreal forests. The viviparous lizard!

This little reptile, unique species of the zootoca genus, lives farther north than any other species of non-marine reptiles.

Found living within the Eurasian boreal forests, viviparous lizards are named after their special ability to reproduce. Not only can they lay eggs but they can also give live birth!

How Viviparous Lizard Survive Winter in the Boreal Forest

Viviparous lizards hibernate during winter by burrowing under the leaf litter. Some lizards do even better by hibernating deep below the soil in empty dung beetle burrows.

They can survive a certain degree of frost by turning into a supercooled state. Generally, they’ll survive these conditions when temperatures are around -3 degrees Celcius. Although the hardiest lizards observed have been able to survive as low as -10 degrees Celcius.

Viviparous lizards are carnivores. They feed exclusively on flies, spiders, and insects.

They can be found in many countries around the Eurasian boreal forests, including the UK, Scandinavia, Russia, and Korea. Zootoca vivipara has the largest distribution of any species of lizard in the world. 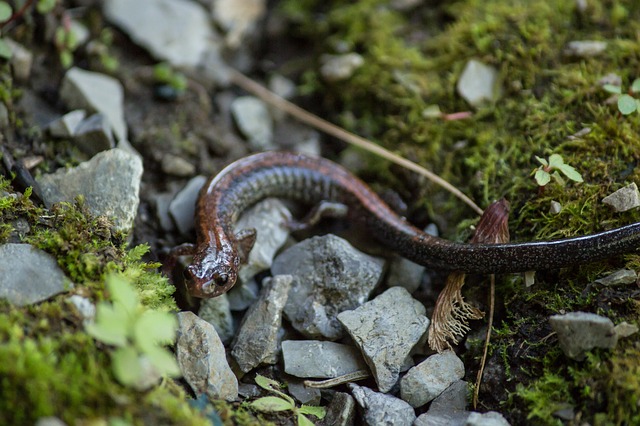 How Amphibians Survive Winters in the Boreal Forest

Amphibians survive through winter much like reptiles. Some aquatic species will hibernate at the bottom of lakes and ponds while others will find shelter underneath leaf litter and dens.

Interestingly, frogs who hibernate outside do have an advantage over frogs hibernating in lakes. Since the forest floor thaws much faster than lakes, frogs hibernating outside will wake up from brumation first. They’ll become active early spring in meltwater ponds and reproduce much earlier than other frogs.

Normally, animals cannot withstand being frozen, but these frogs have a special protein that helps them. Under normal circumstances, ice crystals forming inside an animal would puncture blood vessels and kill them.

Here’s how the process works, explained perfectly in this quote from nsc.org:

“At the beginning of winter, ice quickly fills the wood frog’s abdominal cavity and encases the internal organs. Ice crystals form between layers of skin and muscle. The eyes turn white because the lens freezes.

At the same time, the wood frog’s liver produces large amounts of glucose that flushes into every cell in its body. This syrupy sugar solution prevents the cells from freezing and binds the water molecules inside the cells to prevent dehydration.

So on the one hand, the wood frog’s body allows ice to form around the outsides of cells and organs; and on the other hand, it prevents ice from forming inside the cells–thus avoiding the lethal damage suffered by most animals when they freeze.”

That’s astounding if you think about it! Technically there is no heartbeat, no muscle movement, nothing. Yet the frog is still alive in some kind of cryosleep. Maybe we can look into this special ability if we want to replicate that someday for humans.. Walt Disney anyone?

Frogs are carnivores. They will eat all varieties of insects they can find, the will also eat other frogs, tadpoles, and even small mammals.

Frogs Found in the Boreal Forests

23 species of frogs are found living in the boreal forests worldwide: 15 are true frogs and 8 are toads.

Toads Found in the Boreal Forest

8 species of toads are found living within boreal forests worldwide.

Salamanders Found in the Boreal Forest

7 species of salamanders are found living within boreal forests worldwide.

How Salamanders Survive Winters in the Boreal Forest

Salamanders survive through winters much like other amphibians. When temperatures start to get near freezing, they will migrate deep under the soil where temperatures are milder.

Just like frogs, some species of salamanders also hide under leaf litter where they are frozen alive. Siberian legends speak of salamanders who have been frozen since the mammoth era that come back to life when thawed out.

I believe being aware of these animals is the first step to their conservation.

Reptiles and amphibians play an essential role in ecosystems, both as predator and prey. They do an important part in managing insect population levels, to which I’m sure many of us are grateful.

The problem is, amphibians around the world are already going extinct. It’s estimated that 1/3 of all species are threatened by extinction. That’s a rate higher than birds or mammals.

The causes of their extinction can be linked to many human activities. Habitat loss and degradation are the main factors, as well as the spread of the infectious disease chytridiomycosis.

Chytridiomycosis is a fungal infection that affects amphibians worldwide. In some places, the disease has eradicated as high as 100% of individuals in a population.

But as a citizen like you and I, there is also something we can do. Keeping an eye on amphibian behavior and populations in our local area can do much help to the scientific community.

The fact is not enough information is collected yearly on the status of boreal forest amphibian populations. And citizen scientists like you and I can very much help by taking surveys.

If you love reptiles are amphibians as much as me, think about joining citizen scientist programs like frogwatchUSA and Naturewatch Canada.