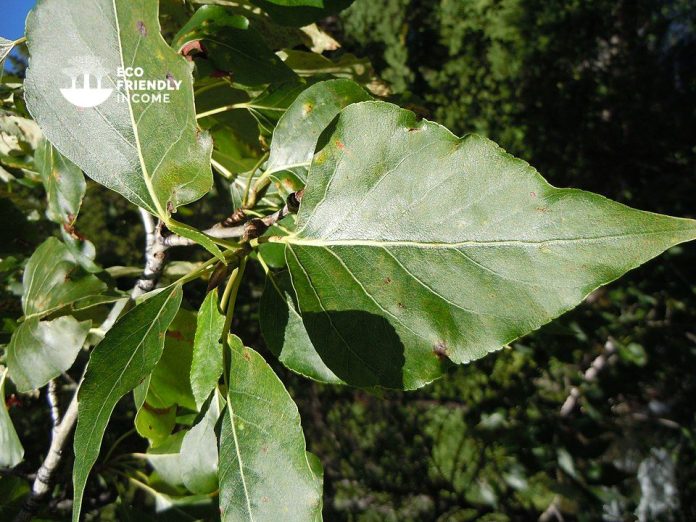 A field guide on how to identify and propagate Balsam Poplar (Populus balsamifera), a hardy zone 2 tree that is native to North America.

Balsam poplar leaves are heart-shaped with serrulate margins and grow in an alternate arrangement on the stem.

Populus balsamifera bark is typically grayish-brown in color and is smooth when young but can become scaly and deeply fissured with age.

The bark of this species is relatively thin, making it susceptible to damage from wind, animals, and other environmental stresses. It contains a sticky, aromatic resin which gives off a distinct balsam scent when crushed.

Balsam poplar catkins are small, yellowish-green flower clusters that hang from the branches of the balsam poplar tree.

They are the male reproductive organs and can measure up to 2 inches in length.

They are covered in tiny, yellow-tinged, resinous glands and contain the pollen that is necessary for fertilization of the female flowers, which are located on the same tree. The catkins also contain small, seed-like fruits.

Balsam poplar catkins appear on the trees from April to May depending on the region.

The typical habitat for balsam poplar is a moist, open area with full sun exposure, such as a wet meadow, streamside, or open woods.

It is usually found in areas with poor drainage or along coastal wetland margins.

Balsam poplar prefers sandy or gravelly soils and can tolerate a wide range of soils, from acidic to alkaline. They are also found in disturbed areas, such as roadsides, abandoned fields, and logged areas.

Balsam poplar trees are a valuable species for wildlife.

They provide excellent habitat for a variety of species, including birds, mammals, and insects. They offer nesting and roosting sites for a variety of birds, and their leaves provide an important food source for many species.

The wood of balsam poplar trees is also used by beavers, who use it to build lodges and dams.

The sap of the balsam poplar tree is also an important food source for deer, moose, elk, and other wildlife. Balsam poplar trees provide excellent cover for many species and can help to create diverse and healthy ecosystems.

You can propagate balsam poplar easily with two methods:

Let’s take a look at both methods:

How to Propagate Balsam Poplar (Populus balsamifera) by Seed

You can propagate balsam poplar easily with seeds, but it’s all about timing.

The best time to collect poplar seeds from the catkins is from early June to mid-July.

It can be tricky to get some fluffy seeds too, here’s the best way to do it:

You want to get to the catkins just before they open because when they do, the fluffy seeds easily get picked up by the wind.

Poplar seeds have short viability so it is recommended to sow as soon as possible.

How to Propagate Balsam Poplar (Populus balsamifera) by Root Cutting

You can also propagate balsam poplar by taking root cuttings from their strong rhizomes. Here again, timing is key:

The best time you should harvest root cuttings from balsam poplar is early spring from May to early June.

Long root cuttings are fine because you’ll be taking the new suckers that come out of them. Long, thick cuttings will generally have a better potential but one should not get carried away and extensively damage the mother tree’s root system.

From there, put the cuttings in a box with peat soil, then cover the root cuttings with compost/leaf mulch mix.

Keep it moist and wait, you will see suckers come out.

You have two options with these:

From there, give your cuttings a whole season of growth before officially transplanting them outside.

Q: What are balsam poplar buds used for?

A: Balsam poplar buds, which contain bioactive compounds such as salicylates, have been reported to have antiadipogenic, analgesic, and anti-inflammatory properties and can thus be used to treat wounds and provide pain relief.

Q: How do you pick poplar buds?

A: To pick balsam poplar buds, use a pair of sharp shears or scissors to clip the buds from the branches of the tree. Make sure to collect the buds early in the spring before they start to open. Collect only the unopened buds and avoid picking the terminal buds (at the end of the main branch).

A: The distinctive scent of early spring, with its fresh, warm, and sweet aromas of honey, caramel, and amber, is created by the bursting and unfurling of resinous balsam poplar buds in the wind.

A: Balsam poplars have edible catkins and its sap can be consumed, which is high in Vitamin C.