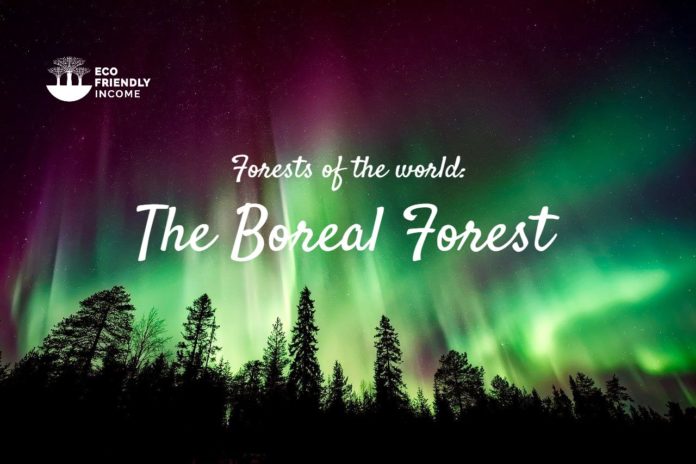 The boreal forests, the largest terrestrial biome on the planet, are vast coniferous forests spanning across the northern hemisphere, mainly north of the 50th parallel. You can find the boreal forests from eastern Canada all the way through Russia and Northern Europe.

North America’s boreal forest combined with Russia’s and Northern Europe’s taiga makes up to 31% of the world’s forest coverage, which equates to 16.6 million square km.

According to Bonan and Shugart, boreal forests cover 11% of the earth’s total land mass.

There are four distinguishable seasons in the boreal forest: Summer, Fall, Winter, and Spring. Spring and Fall are very short unlike Summer and Winter, which last the majority of the year.

The typical growing season in the boreal forest or taiga is about 130 days, but depending on the location, it can go as low as 80 days to as high as 150 days. During the offseason, trees, plants, and some animals go into hibernation.

When you think of the boreal forest, the symbolic image is that of large mysterious forests covered in conifers.

There are many types of ecosystems found throughout the boreal forest, the most common are wetlands, bogs, and fens. But you will also find grasslands, barrens, rolling hills, rocky outcrops, along with countless rivers, and lakes.

Boreal forests go through parts of the Appalachians and the Rocky Mountains in Canada. In Asia, they go through the Siberian mountain ranges, and also through a part of the Alps in Europe.

The boreal forest itself is a massive ecosystem that supports all the living species found within but also helps the environment outside of its range.

For example, the extensive wetlands found within the boreal forests act as a sponge for much of the water in the area, which in turn provides excellent protection against flooding.

Additionally, in periods of drought, the stored water provides a valuable supply of water, and the spongy fabric of the forest regulates water flowing from upland areas to lowland areas. The wetlands are excellent filters of water, they effectively remove impurities from water flowing through it.

The giant biomass of the boreal forest also acts as a shield against the destructive effects of erosion. It improves the cycling of nutrients and the fast decomposition promotes the formation of new soil.

The boreal forests do a large part in regulating the earth’s climate, they store massive amounts of carbon in trees, peat deposits, soils, and lake sediments.

Trees Found in the Boreal Forest

Fun fact: Did you know many of these boreal forest trees have medicinal properties?

Plants, Fungi, Lichens, and Mosses in the Boreal Forest

The boreal forests contain an amazing amount of small plants, fungi, lichens, and mosses. Many of these actually have value as a food source, medicine, or even as a commercial product, they can be called non-timber forest products.

Below are just a small portion of the non-timber forest products:

Animals Found in the Boreal Forest

Boreal forests in the world are home to many sorts of animal species, the following are most common and widespread:

Fun fact: Some key symbolic animal species native to the boreal forest, such as beavers, loon, and caribou are portrayed on Canadian coins.

Reptiles, Amphibians, and Insects in the Boreal Forest.

Below you will find the most common and widespread species:

4 Wonders and Mysteries of the Boreal Forest

Since much of the boreal forests is still wild, it remains a very mysterious place.

Some say Sasquatch lurk in the forests, others say thunderbirds still fly the skies, and some tell tales of fairies that enchant people into long sleeps.

But some are factual and still bring amazement to children and adults alike:

Made by a meteor Impact 215 million years ago, this ring-shaped lake is intriguing to find when you look at the map of northern Quebec. The Manicagouan crater is quite large with a diameter of 70 kilometers across, and a water volume of 137.9 km3.

An earthly phenomenon that is rarely seen outside of the northern hemisphere. Aurora borealis are symbolic of the northern boreal forests, and arctic regions. They are caused by protons and electrons from solar wind smashing into the earth’s atmosphere and releasing energy.

Earth truly is magical, did you know some mushrooms glow in the dark? Omphalotus olearius, commonly known as the jack-o’-lantern mushroom is one of the mysteries of the boreal forest. At night, you can see them faintly glow in the forest. Perhaps that’s a sign from mother nature telling you not to eat it because it is poisonous.

On June 30th in 1908, an explosion lit the skies and devastated hundreds of square kilometers of Siberian forest, the aftermath was clearly visible but mysteriously, no meteorite could be found.

Years later, scientists went to extract microscopic samples from the soil dating to that era and managed to identify its source: yes it was a meteorite. But since it had entered the atmosphere at an angle, it had been completely disintegrated. All that remained were small bits of minerals.

What was left from the atmospheric entry was a giant fireball, which caused the largest meteor impact in recorded history, hundreds of times more powerful than the Hiroshima blast.

In Canada, the boreal forest nearly covers 60% of the habitable land, it is one of the last nearly untouched forests left in the world. Thankfully, about 94% of Canada’s boreal forests are crown land, which means it is owned and managed by the Canadian government.

Canada works hard to protect its forests and puts substantial funds into maintaining and developing sustainable management of its forest resources.

This ensures that the Canadian boreal forests continue to thrive and remain healthy. Balancing the environmental, social, and economical benefits they provide over time is the philosophy behind the sustainable movement the government has adopted.

The creation of parks and recreational areas continues to happen to this day, to preserve the especially unique areas that have thriving biodiversity, for the good of the forest, and for scientific research.

In the past, harvesters didn’t really care about how clear cuts affect the forest, but thankfully today this has changed.

New practices in harvesting now imitate the disturbances that are caused in the forest naturally. Harvesters now mimic the effects that natural events such as forest fires or insect outbreaks cause, which helps the forest regenerate itself.

Every province has laws regarding sustainable harvesting, for example, areas that are cleared must be analyzed first.

Analysis will determine if the area has enough potential and strength to regenerate itself. In the case that it does, it will be left alone and where it does not, it must be replanted promptly.

While not every forest in the world has the capacity to regenerate itself quickly, it’s interesting to note that the boreal forest has a very high capacity for regeneration.

Generally, the life span of a tree in the boreal forest is less than 100 years, due to factors such as humidity, widespread fungus, insects, and weather conditions. Trees often fall naturally, which opens up an area to sunlight and booms it back to life.

It’s said that in the boreal forest, nearly 75% of harvested areas have the potential to grow back naturally. Everything else is reforested by tree planters such as myself, using a mix of tree seedlings which are chosen according to the area.

Large companies and small companies alike hire tree planters from the beginning of June until September – October (depending on when the soil starts to freeze again). A tree planter’s job is to manually reforest areas that have a smaller chance of regenerating.

We plant different types of trees throughout the summer. The most common tree essences are black spruce, white spruce, and tamarack larch, which are planted in humid, peat soils. When the soil is dry and sandy, we plant essences like jack pine and white pine that generally do better in that environment.

For example, on a normal day, we could have lots of white and black spruce saplings to plant. They would be planted in the general areas and we would reserve the tamarack larch for the streamsides, for example, because they generally do better in those types of soils.

For the specific company I’ve worked with, tree saplings came in different sizes of boxes. Every box can have from 25 trees each to 36, 45, 67. The higher the number of trees per box, the smaller the saplings are.

The trees seen above were from boxes of 25, they’re generally the largest and sturdiest saplings we plant. At this size, they’re about 3 years old.

Tree planters fill their bags with as many saplings as they can, then plant them in lines, leaving enough space in between each for healthy growth.

High-baller (veteran) tree planters can plant as many as 3000 trees per day, which ranges from $400-$500 Canadian dollars per day.

It’s not easy work but you get paid by the amount of trees you plant and by the quality of your planting.

Canada needs more tree planters, so if you are thinking of joining us in the summer, I highly recommend it. Contact us at [email protected] for more information.

In Russia and Scandinavia, the boreal forests go by the name of Taiga.

The taiga in Eurasia covers a large part of Sweden, Finland, Norway, Estonia, some of the Scottish Highlands, and coastal areas of Iceland. Nearly all of Russia from east to west, it stretches into northern Kazakhstan, northern Mongolia, and Northern Japan, on the island of Hokkaido.

The Nordic Scandinavia on its side has a dense boreal forest but accounts only for 2% of the world’s forests.

While it resembles very much the north American boreal forests, there are some differences:

It’s interesting to note that the taiga in its current form is a relatively new phenomenon on the planet. It has only existed this way since the beginning of the Holocene period, about 12,000 years ago. Prior to that, the worldwide boreal forest range had been covered in massive ice sheets.

One particular animal found in the Russian taiga that isn’t found in North America is the Siberian tiger. They inhabit high latitudes of their boreal forests and travel large distances to find prey. One Siberian tiger can weigh as much as 300kg!

Perhaps one of the cutest animals in the world, the Japanese dwarf flying squirrel is one of the old world squirrels native to the Hokkaido region of Japan. They live in subalpine and boreal evergreen forests on the Honshu and Kyushu islands.

Perhaps one of the strangest animals, it’s not quite a deer but has properties of several animals. They are a solitary and shy animal, they won’t grow antlers but tusks instead.

Threats to the Boreal Forests

What We Can Do About It

It takes initiative to preserve the wildlife and biome of the boreal forests. We can take examples of some programs that have worked and apply them worldwide.

For example, laws against excessive hunting and trapping are enforced by having park rangers patrol the areas and locals report the incidents. Fines and possible jail sentences are handed to individuals infringing the laws.

Any company that wishes to start a lumber project must first apply to the ministry of forests and ensure they are using proper equipment, techniques, personnel, and are obligated to manage the reforestation of the areas they work on.

Any mining or petroleum company must manage land reclamation during and after their project is completed. Any infringement is met with hefty fines and should have the ability to shut down a company.

Resources must be allocated to new green technologies to phase out of fossil fuels and meet climate goals.

Finally, boreal forests must be protected, unique ecosystems must be turned into natural parks to ensure they stay away from human influence and continue to thrive.