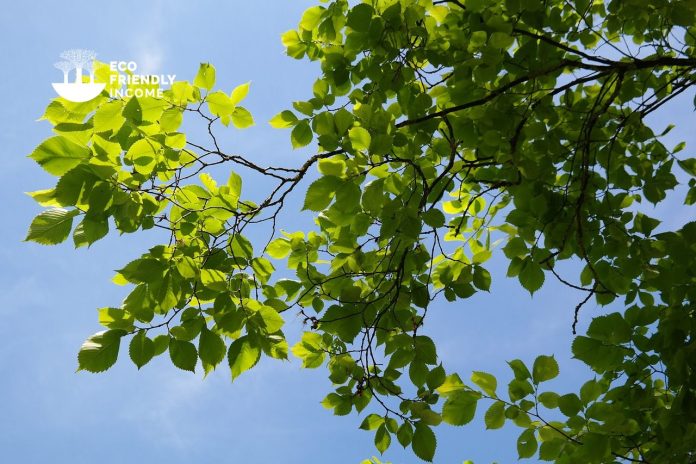 A field guide on how to identify and propagate Wych Elm (Ulmus glabra), a hardy tree that is native to Europe and Eastern Asia.

Wych elm leaves are oval to elliptical-shaped with pointed tips, serrated margins, and grow on the stems in an alternate arrangement.

If you look closely, you’ll notice the base of each leaf is unequal.

Wych elm bark is smooth and gray when it is young but as it ages it develops scaly furrows.

The Wych Elm’s flowers are hermaphrodite, just like those of the Ash, and have both male and female reproductive parts.

They are purplish-red and are held in bunches of 10 to 20, which are spread along the twigs. These flowers appear in early spring before the leaves, helping to facilitate pollination by the wind.

Wych elm trees are typically found in temperate regions of Europe, western Asia, and the northern half of Africa.

They prefer moist, well-drained soils and can often be found in woodlands, hedgerows, river valleys, and along roadsides.

Because of the Dutch Elm Disease, Wych elm has become quite rare naturally.

The white-letter hairstreak butterfly associates with the Wych Elm, especially in its caterpillar stage.

Additionally, many birds consume elm seeds, and the foliage offers sustenance for the caterpillars of several moths, including the peppered, light emerald, and white-spotted pinion.

You can propagate Wych Elm with two effective methods:

Each methods give a fair chance of success but since the seeds appear early, and don’t need stratification, that’s really the best option to take.

Alternatively, if you’d really like to propagate by cuttings, take a look at our detailed propagation guide.

How to Propagate Wych Elm (Ulmus glabra) by Seed

If you have access to a Wych Elm tree nearby, you can get some seeds quite easily, it’s just about timing.

If not, you can always order Wych Elm seeds online at Habitat Aid.

Wych elms make their seeds early in the season, they appear before the foliage does.

The best time to harvest Wych Elm seed is about end of April to early May.

They’re fairly voluminous, and easy to access, just wait until they turn brown to harvest them (this means they’ll be fully mature).

Now the next step is sowing:

Good news! Since these are spring seeds, they won’t need to go through a cold stratification process to germinate.

As a rule of thumb, it’s best to sow them as soon as possible after you harvest them.

Tip: You can check for viability by pressing the seed in between our fingers, full seeds are healthy, flat, hollow seeds are no good.

Their germination rate isn’t very high, as the tree relies on many thousands of seeds to propagate naturally.

Considering this, you need to plant many seeds at once. You don’t really need to space them out until they germinate.

Your Wych Elm seeds should germinate within 1 to 2 weeks.

Give it at least a full season of growth until you transplant them outdoors.

Q: Why is it called a wych elm?

A: The etymology of the word ‘wych’ in Wych Elm refers to its pliable wood rather than witches, who were thought to avoid elm trees. This malleability makes it unfit for building and as a fuel, yet it is highly resistant to wet conditions, like alder wood.

Q: What is the difference between elm and wych elm?

A: The English elm’s leaves are more rounded than those of the wych, and the asymmetry at the base is less noticeable; the longer side of the leaf often covers the shorter side, hiding the stem.

A: Since its introduction to the UK in the 1960s, Dutch elm disease, a fungal infection, has been a major cause of devastation to populations of wych elms, and galls from aphids can also affect them.

A: Although severe reactions are rare, members of the Ulmus genus, such as Elm, may cause sensitization. Typically, the most frequent reactions are irritation of the eyes and skin.