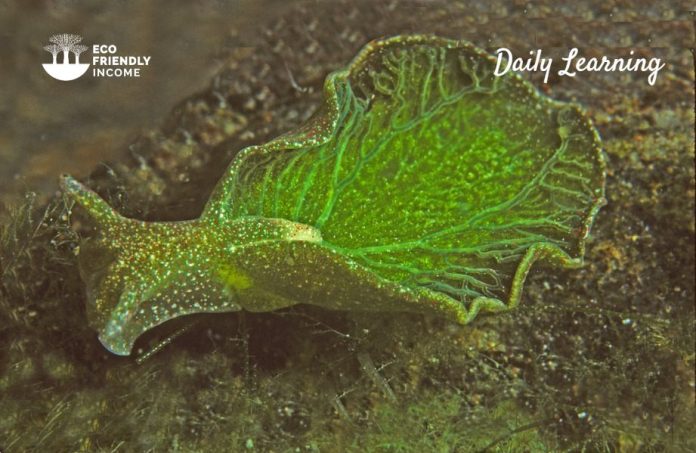 The Eastern Emerald Elysia (Elysia chlorotica) is an incredible species of sea slug found along the eastern coast of North America.

This unusual creature has adapted a remarkable set of abilities in order to survive its harsh marine home, with both animal-like characteristics as well as plant-like adaptations.

This makes it a perfect example of evolutionary adaptation at work in nature.

You can find Eastern Emerald Elysia, if you’re lucky, along the eastern coast of Canada and the U.S.

From Nova Scotia in the north, all the way down to Florida in the south.

You can typically find it, if you’re lucky, in salt and tidal marshes, shallow creeks, and pools of depths less than 0.5m, where its main food source, the intertidal alga Vaucheria litorea, is abundant.

* An osmoconformer is any marine invertebrate that keeps its internal salinity the same as the seawater that surrounds it.

How to Recognize it

The stages of development can be identified by the slug’s morphology and color.

The slugs initially start out as veliger larvae which possess a shell and ciliated vellum used for swimming and obtaining food.

As juveniles, the slugs are normally brown with red pigmentation on their underside.

Metamorphosis into the adult phase only occurs after coming into contact with and consuming V. litorea, which is also when their color and morphology change.

After their initial feeding, the slug takes in chloroplasts from the plant and stores it in its digestive tract, turning it from brown to a bright green.

The majority of adults lose the red spots. The green color persists only while the chloroplasts are functional.

Once the chloroplasts are expelled, the slug reverts to a gray color.

Adults normally range in size from 20-30 mm, but specimens up to 60 mm have been documented.

The Eastern Emerald Elsyia is named for its adult structure, which consists of two large lateral parapodia on either side of its body that give it a leaf-like shape.

Eastern Emerald Elysia is one of the most fascinating animals ever discovered by science.

Let’s take a look at what makes them so amazing:

One of the most interesting adaptations possessed by the Eastern Emerald Elysia is its metabolic ability to photosynthesize, like a plant.

It does this by absorbing sunlight and storing it inside its body before breaking it down into energy to power its life processes.

This remarkable adaptation has allowed it to survive in even the harshest of environments and gives it a unique edge in the struggle for survival.

Technically, Elyisia chlorotica does not perform photosynthesis. It does what is called “kleptoplasty”, which means it eats the chloroplasts* which do the photosynthesis and it takes the energy from them.

More specifically, it obtains its nutrients by sucking out the contents of Vaucheria litorea cells (an algae) after projecting its radula, a scraping structure, into their cell walls.

The cellular contents are then passed through the slug’s specialized digestive tract and sequestered into the diverticula of its digestive system, making it on occasion turn bright green.

This newfound ‘power’ or color gives them the ability to ‘sunbathe’ for up to 10 months.

By sunbathing, they just extend their parapodia to absorb as much sunlight as possible.

* Chloroplasts are organelles that contain chlorophyll, the pigment that absorbs sunlight and converts it into energy.

Above, you can see the slug’s digestive system, which consists of densely packed tubules that branch throughout the animal’s body.

Each tubule is made up of a layer of single cells containing animal organelles and numerous algal plastids.

We mentioned earlier that the slug eats the chloroplasts, but here’s an interesting fact:

Chloroplasts don’t have all the genes necessary to fully complete photosynthesis, and an animal would obviously not have them too. So what gives? Well, a virus co-evolved with the animal and actually carries all the remaining plant genes.

So when this animal reproduces, the egg contains its genome, yes, but the mother also leaves a little sample of the plant and infects the eggs with the virus.

According to Sven Gould’s Study, of the University of Dusseldorf, another remarkable adaptation possessed by the Eastern Emerald Elysia is its ability to remain in a state of hibernation for 2 months and upward.

Elyisa chlorotica seems to have the ability to burrow under the ocean substrate in periods of hard environmental conditions.

This way, it can significantly reduce its energy requirements by going into dormancy.

Of course, in this condition, sunlight would not help them endure this subterranean slumber. Although studies seem to indicate that a digestive sac full of nutritious chloroplasts to munch on would do the trick.

Which means Emerald Elysia survive a long time without food because they can process the secreted sugars from chloroplasts.

All in all, Eastern Emerald Elysia has an edge over some other forms of life which could perish during rough times.

The Eastern Emerald Elysia also stands out for its unique coloration and camouflage abilities.

Its upper surface is covered in an iridescent green outer layer, allowing it to blend into any natural environment.

Its lower surface is colorless, allowing it to appear as if it’s floating on the surface of the sea during periods of feeding. As a result, the Eastern Emerald Elysia can hide from predators while still having adequate access to food.

In addition to their ability to photosynthesize, hibernate, and camouflage, the Eastern Emerald Elysia is also a hermaphrodite.

This means that they have both male and female reproductive organs.

This means they can reproduce sexually with whatever organ they want when they meet a partner.

Additionally, they can self-fertilize when partners are rare or non-existent.

The eastern Emerald Elysia breeds once a year in the early spring.

Approximately one week after they are laid, eggs hatch out in strings covered with a mucous-like substance.

The Eastern Emerald Elysia is an amazing animal because of its incredible adaptations.

It’s definitely an attractive species with vibrant coloration and numerous features that make it an eye-catching animal.

Personally, I think the Eastern Emerald Elysia is one of the most remarkable and intriguing creatures in the world. What do you think?

Q: How long can an Eastern Emerald Elysia live?

A: Elysia chlorotica has an average lifespan of about 11 months, with adults dying en masse once they have laid their eggs in the springtime.

Q: What does an Eastern Emerald Elysia typically do during its life?

A: Most of the time, Elysia chlorotica float in the water or among V. litorea for optimal sun exposure, as they are not social and only join others for mating.

A: Last reported in 2011, Elysia chlorotica populations seemed not to be in decline but in recent years, they seem to have become quite rare.

A: Yes, but technically not by itself, it eats chloroplasts from the Vaucheria litorea algae which do the photosynthesis inside the slug’s body.

Q: Is Elysia chlorotica a plant?

A: Almost, it’s still a slug belonging to the Plakobranchidae family, but has a symbiotic relationship with algae that live inside their bodies.