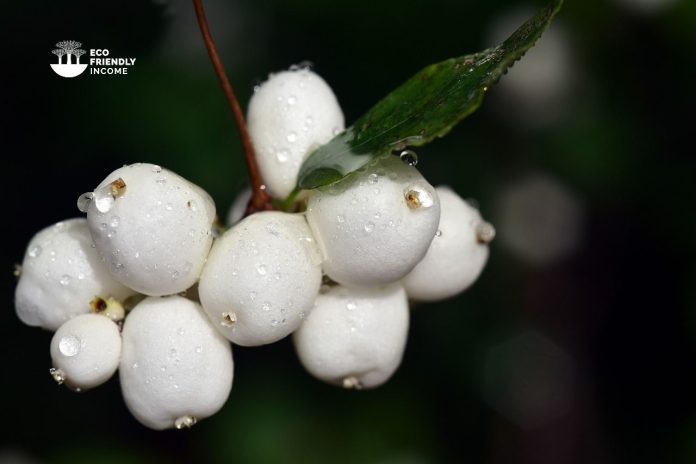 A field guide on how to identify and propagate Snowberry (Symphoricarpos albus), a very hardy zone 2 perennial shrub that is native to North America.

Common snowberry is not a species I see very often while in the boreal forest. Maybe because I’m usually in disturbed sites such as logging areas.

Although when I would spot it, it was usually in rather dry, deciduous forests. During most of the season, snowberry is not so outstanding. It becomes much more noticeable late in the season when the white fruits on the branches give lovely contrast with the fall colors.

Snowberry fruits may look tempting but are not edible, people will generally grow them in urban and rural settings for their ornamental appeal.

Apart from its ornamental appeal, snowberry does have medicinal uses:

First nations used snowberry to treat burns, warts, rashes, and sores (when crushed into a salve). The roots and stems can be used in tea to treat stomach ailments.

How to Identify Snowberry (Symphoricarpos albus)

Snowberry leaves are simple, elliptical to oval-shaped, have undulate margins, and have a glossy surface. They are arranged in opposite pairs along the stem, and each leaf has a short stalk attaching it to the stem.

Snowberry flowers are small, white to pink, and grow in clusters. Each flower has five petals, a center with 4-5 stamens, and a fluffy yellow center.

Snowberry fruits look like small, white berries that grow in clusters on the stems of the plant. The berries are about 1/4 inch in diameter and have a smooth, waxy surface.

The flesh of the berry is white and juicy, and may look tempting but isn’t edible for humans. They contain saponins, a mildly toxic compound for humans, but very beneficial for some wildlife such as birds and butterflies.

Common snowberry fruiting season is from August to October.

Common snowberry (Symphoricarpos albus) bushes bloom from May to August.

You will usually find snowberry growing in full sun to partial shade, moist, well-drained soils, but is adaptable to a variety of conditions. Snowberry is often found in woodlands, streambanks, and forest edges.

Plants often associated with snowberry are:

Common snowberry has great wildlife value as a shrub. It’s used as cover for small mammals and birds and as a food source by others.

Several non-game species of bird including:

How to Propagate Snowberry (Symphoricarpos albus)

There are many easy ways to propagate snowberry.

You can propagate common snowberry (Symphoricarpos albus) by division, by taking cuttings, or by growing it from seed.

How to Propagate Common Snowberry (Symphoricarpos albus) by Division

Common snowberry is a suckering plant, which means it can easily be propagated by division.

It’s not so hard to separate them without harming the mother plant. Although the best time to do this for common snowberry would be from spring to early summer. Avoid doing this in the fall because at that time the plant spent much of its energy creating its fruits.

Here’s how you can do it:

How to Propagate Common Snowberry (Symphoricarpos albus) by Cuttings

Taking softwood cuttings from the plant is also an efficient way to propagate snowberry.

A great time to do this is from early to late summer, on new active growth.

The current season’s growth starts to harden at about the 6-week mark after the first leaves emerge in spring. That’s the perfect timing for you to harvest your cuttings.

How to Propagate Common Snowberry (Symphoricarpos albus) by Seed

Of course, just like most other plants, you can propagate common snowberry by seed.

Although like the majority of other northern species, the seeds will have to go through stratification first.

How to Harvest Common Snowberry Seeds

Snowberry seeds are inside the fruit, there are two ways you can harvest them:

Personally, I do the first method because I’m not in any rush but if you wanted to mass plant common snowberry, I’d use the second.

They require a long stratification, you can either place them outside in pots to let nature do its work or you can do it inside with the help of your refrigerator.

Inside: Place seeds in a ziplock bag with dampened sand, then tag well with the name and date. Place in freezer for 90 days, then thaw in room temperature water for 12 hours. Put back in ziplock in the refrigerator (not freezer this time!) for another 60 days. After this period, plant in potting soil, moisten, and cover with plastic wrap to keep a good level of humidity.

Outside: Plant your seeds in potting soil, cover them well, and leave them outside during winter. (You must let the snow cover them or the cold wind can kill the seeds)

Q: How Poisonous is Snowberry?

A: Snowberry fruits are mildly toxic to humans or pets (because of saponins). It won’t cause much harm to eat in low quantities because the body poorly absorbs saponins but still not recommended.

Q: What are the health benefits of Snowberries?

A: While not recommended to eat, it appears snowberries may have medicinal effects if used right (According to the University of Washington). Quoted:

“Snowberry contains saponins, a naturally soapy substance useful for treating and cleansing the skin. Snowberry was used to kill body parasites, clean and heal wounds, used as an eye wash for sore eyes, as a diluted tonic, used as a gentle cleanser for babies and children. The Chehalis Tribe is documented for using the berries to wash hair.”

Q: Are snowberries poisonous to touch?

A: I have handled the berries myself with zero side effects, they are safe to touch. The mildly toxic component, saponins, is only toxic if ingested.

A: In North America, it is a native plant, hence non-invasive.

Q: How do I identify common Snowberry?

A: The easiest way to identify common snowberry is to look for clusters of white fruits stuck to a stem, look for oval, dark green opposite paired leaves, or clusters of small pink, bell-shaped flowers.