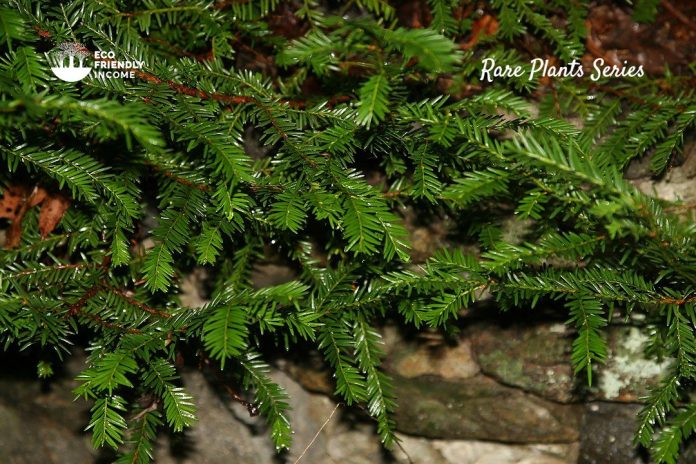 A field guide on how to identify and propagate Canada Yew (Taxus canadensis), a hardy zone 2 perennial shrub that is native to North America.

At first sight, you could easily mistake Canada Yew for other conifer seedlings when spotted in the underbrush.

Naturally, it usually grows as a low-lying bush, but with the right conditions, it’s possible that it reaches the height of a medium-sized tree.

Canada yew is a particular type of conifer; it doesn’t produce the traditional cones, but instead produces berry-like red fruits in late summer.

Did you know? As of 2022, Canada Yew has become a rare plant that merits some concern.

Mainly because it contains taxol, a unique but poisonous chemical that’s been a focus of cancer research.

Canada yew is one of the last unexploited yew species in the world. With the late success of paclitaxel (The taxol-based cancer therapy drug), there is a potential threat that Taxus canadensis may also be over-harvested.

As a nature lover interested in this plant, it’s also your duty to be very careful with the specimens you find in the wild. Additionally, if you learn how to propagate them, there is a good chance you can help with their status.

Canada yew needles are acicular, sharply pointed, and grow in alternate arrangements laterally along the stems of the plant. Each needle is approximately 1-2 cm in length and is green in color.

If you were to pick one off and try to roll it between your thumb and index, it would not roll. This is a way to identify Canada yew that also works for balsam fir. Many other conifer needles, like spruce, for example, would roll between your fingers instead.

Canada yew produces male and female cone-like structures called strobili that contain pollen. You can spot their cone-like flowers on the stems during spring.

The male strobili contain the pollen, which gets carried over by the wind to pollinate the female strobili, which then turns into the seed wrapped in red flesh.

Canada Yew fruits are small, red, and berry-like. They are produced in clusters and have a sweet taste. Each fruit usually contains a single seed.

Their fruit ripens in late Summer to Fall.

Warning: While you can eat the flesh of the fruit (Not the seed), every other part of Canada Yew contains taxol, a poisonous substance to humans and dogs.

Taxus canadensis grows in a wide variety of habitats such as conifer and mixed forests, swamps, or mountainous areas.

Personally, I have found it growing under old, undisturbed forests. They prefer soil that’s well-drained, you have a chance to find them growing in shaded rocky slopes or mixed forest undergrowth.

Geographically speaking, Canada yew naturally grows on the east coast of America. You can find them growing from Northern Quebec all the way down to North Carolina.

If you find some of these plants, there’s a good chance Canada Yew might be growing nearby:

Canada Yew (Taxus canadensis) is a favorite of moose and deer, which they browse all year long.

The fleshy part of the fruit is also a source of food for birds such as:

Canada Yew is not an easy plant to propagate, but there are two ways that work.

You can propagate Canada Yew (Taxus canadensis) by taking stem cuttings, or by seed.

How to Propagate Canada Yew (Taxus Canadensis) by Cuttings

Taking stem cuttings is a possible way to propagate Canada Yew. That involves taking stems at a specific time of the year and giving them the conditions to form roots.

Each stem cutting is a clone of the original plant, it’s a slow process but can be quite effective if all the elements perfectly align.

For Canada Yew, the best time of the year to take cuttings is during dormancy which is early spring or fall.

How to Propagate Canada Yew (Taxus Canadensis) by Seed

Like other conifers, the most effective way to propagate Canada Yew is by seed.

Although like the majority of other northern species, you will need to put your seeds through stratification first.

How to Harvest Canada Yew Seeds

You can get your Canada yew seeds during fall when the fruits are ripe on the bush.

Every red fruit contains one seed.

What you can do is let the fruits dry to separate the seed from the flesh more easily.

You can place them under a fine layer of potting soil and leave them outside during winter to naturally stratify.

Or if you’re doing it indoors, place the seeds in damp sand inside a ziplock bag.

Next, place the ziplock in your freezer for 90 days, after this take them out and let them soak in room temperature water for 12 hours.

Finally, place them back into your refrigerator for 60 days.

Congrats! You have just stratified your seeds.

To germinate, sow the seeds in peat moss under a fine layer of soil, moisten and wait patiently.

Canada yew seeds are very slow to germinate. It can take from 8-12 weeks until germination happens, and some seeds may need to wait another year.

Q: How do you differentiate a young balsam fir seedling from a Canada Yew?

A: Look closely at the needles, Canada yew needles are sharply pointed while balsam fir needle tips are blunt.

A: Yes, the needles, roots, and seeds are all poisonous. The only part that isn’t poisonous is the flesh of the fruit.

A: It is safe to touch Canada Yew, although it proves poisonous if ingested or applied internally.

Q: What are Symptoms of Canada Yew poisoning?