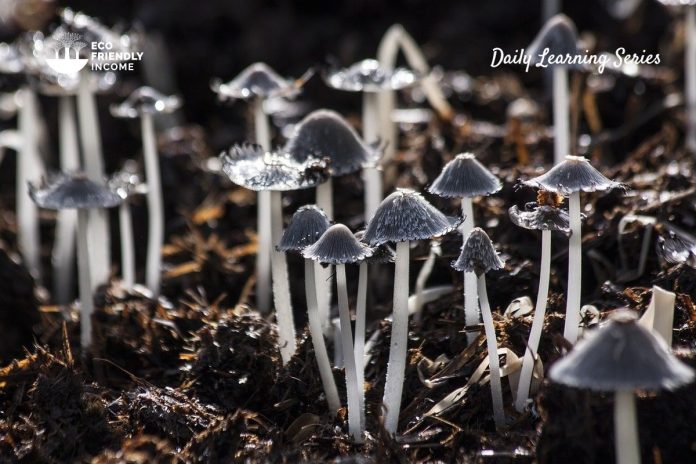 Today we take a look at an interesting part of the natural world, the fungi kingdom.

The question we look into today exactly is: What is the main function of species in the fungi kingdom?

To answer this question, we’ll get into the details and mechanics that help this kingdom thrive.

The Main Function of Fungi

The main function of fungi is to decompose organic matter.

Fungi secrete enzymes that break down complex molecules in dead plants and animals into simpler compounds that can be absorbed by the fungi. This process of decomposition is important for the recycling of nutrients in ecosystems.

A simple breakdown of fungi into 4 parts:

If you look at this drawing, you can understand why fungi are decomposers. The “food source” is part of their organism, it’s necessary for them to break down organic matter to live.

The hyphae also play an important part in the fungi’s functions. This root-like system helps mineralize organic matter and can transfer these nutrients to plants.

These 4 categories of mushrooms separate them by their behavior, do they all decompose organic matter?

4 Other Functions of Fungi

Decomposition is not the only function of the fungi kingdom. They are carbon cyclers; soil formers; nutrient mineralizers and utilizers; protectors from pathogens and herbivores; and controllers of plant and insect populations.

Fungi that decompose wood play an important role in the global carbon cycle. By breaking down wood, they make the carbon stored in it available to build soils, and microbial communities, and ultimately nourish plants.

Formation: Fungi such as oyster mushrooms and chicken of the woods break down cellulose that helps create new soil.

Mineralization: As these fungi dine, some of the nutrients leak into their surrounding environment. These nutrients that escape digestion become “mineralized” in the soil and help form the base of the terrestrial food web.

Utilization: Mycorrhizal fungi such as chanterelles aid the growth of their symbionts by scavenging and transferring important minerals nutrients.

Fungal endophytes that colonize plants also provide them with protection against herbivory insects. These endophytes cause insects to have a lower growth rate, developmental rate, and survival rate.

Entomopathogenic fungi are a group of fungi that kill insects by infecting them and feeding on their bodies. These fungi live in the soil and penetrate the insects’ cuticles to enter their bodies.

Fungi can also cause foliage disease in plants that can eventually kill them.

In conclusion, we see that the main function of the fungi kingdom is to decompose organic matter, but it’s not all.

Fungi are also important for carbon cycling, soil formation & mineralization. They also help plants utilize nutrients in the soil, and help protect them against insects and diseases.

They also help keep insect and plant populations in check by infecting and killing them.

A: Yes, as the organic matter decomposes, mycorrhizal fungi replace saprotrophs as the main decomposers.

A: Yes, microscopic endophytic mushrooms attached to the roots of plants or found in soil do synthesize and decompose metabolites.