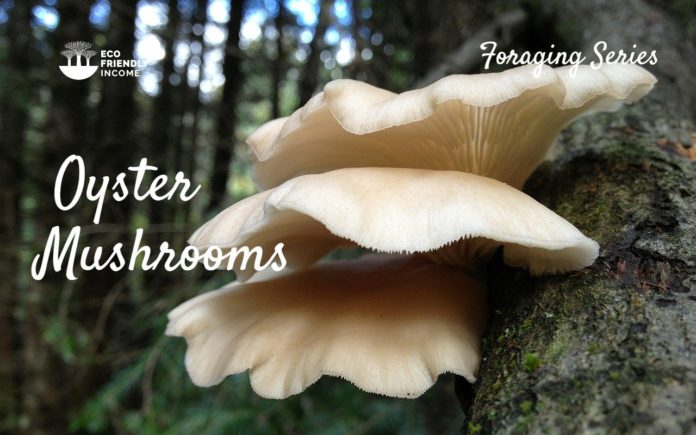 Learning how to identify oyster mushrooms is pretty easy, and once you do, you’ll have a new wild treat to bring home to your dining table.

They are a mushroom with one of the longest picking periods out there. They’re available nearly all year long.

I’ve been a tree planter for many years now, I’ve had the opportunity to see oyster mushrooms numerous times. Most commonly though, I have seen these grow after my planting season when the cold weather creeps in.

They have a mild taste but are quite nutritious, which makes them a worthy mushroom to bring back home.

I think any mushroom lover should go hunt for them, so I decided to share my knowledge and teach you how to identify oyster mushrooms.

In this guide, you can expect to learn the following:

Oyster Mushrooms (Pleurotus ostreatus) are the nearest thing to a year-round mushroom. You can find and eat them any time of the year, but from late August to mid-June is the best picking season.

While they do spawn during summer, the tastiest oyster mushrooms you’ll pick are the ones either early spring or fall.

Mid-summer harvest tends to be almost clear white and break easily in your hand. But oyster mushrooms picked during colder months will have gray caps and a much firmer texture.

Generally, most people agree that the firmer oysters taste better and are more nutritious.

Additionally, factors like rainfall and weather affect when oyster mushrooms start to fruit. A good week of rain is always beneficial for any mushroom to spawn.

Even a warm spell mid-winter can trigger oyster mushrooms to fruit.

How to Identify Oyster Mushrooms

Oyster mushrooms are a species of wood-inhabiting mushrooms. Their spore print is white, and they have white gills under their caps.

The majority of oyster mushrooms you’ll find won’t have much of a stem, rather they’ll be stuck directly to a tree.

The color of their caps ranges from white in the warmer months, to brown and gray in the colder months.

Oyster mushroom cap edges are curled inward. Additionally, if you look closely, you’ll see the gills at the edges are more numerous than the ones nearer to the base.

They rarely spawn alone, most commonly seen as clumps of mushrooms growing on top of another.

Another possible way to identify oyster mushrooms is by their scent. Generally, people tend to say they have a smell similar to anise. Others say they get a fishy or sea-foody smell from them.

There are some oyster mushroom lookalikes, here’s a few of the most likely you are to encounter. Let’s look at how you can tell them apart:

How to tell Lentinellus ursinus apart from Oyster Mushrooms:

Here’s how you can tell oyster mushrooms apart from peeling oysterlings:

This mushroom has been linked to an outbreak of serious illness and death in Japan back in 2004. Quite strange since it had been widely eaten before that point. In consideration of this, we recommend to steer clear of angel wings.

Where Oyster Mushrooms are Found

Oyster mushrooms are quite common. Anywhere you can find plenty of tree stumps and fallen trees in a generally wet area is a good place to look.

Since they are saprophytic, you will only find oyster mushrooms growing on dead or dying trees. They are part of the decomposers of the world.

There is one type of tree it is often associated with: Beech trees. A forest where beech trees grow is a breeding ground for oyster mushrooms.

An important point to remember: Oyster mushrooms only grow on deciduous trees, any similar-looking mushrooms found growing on conifers are not oyster mushrooms.

When freshly picked and cooked, oyster mushroom flavor is mild but pleasant. It can pull flavor from ingredients you add while cooking.

The best part about oyster mushrooms is the texture. They have a soft yet chewy texture that makes them a pleasant addition to your favorite dishes.

How to Store Them

Storing oyster mushrooms correctly is important to keep them in good condition. You never want to store them in a sealed plastic bag or container.

The best option is a brown paper bag or a container with a clean towel over it. Doing this will ensure you control the moisture and prevent any molds from growing.

Place in a dark, cool place until ready to cook.

Oyster mushrooms also freeze well, since they naturally endure frost in their environment. It’s recommended to blanch or sauté them first before freezing, this will preserve their delightful texture.

How to Clean Them

Before you can eat them, you need to clean the mushrooms. As a general rule of thumb, not just with oyster mushrooms but any other mushroom, you don’t want to run water on them.

If you take your mushrooms to the sink and clean them in running water, they will absorb water and puff up. It will make them less savory when cooked.

What you want to do is take a clean hand cloth and gently rub off any dirt from the mushroom. A clean little brush is also handy to get into the cracks. That’s really all you need to do, they will cook much better if they’re not wet.

How to Cook Oyster Mushrooms

Where I work, we live in camps in the northern boreal forests. This far away from civilization means we have to cook all our food ourselves. But thankfully, there are some wonderful cooks that work with us, and they’ve taught me the secrets to cooking Oyster mushrooms to perfection.

Here’s what you want to do:

That’s it! That should have covered everything you need to know to identify oyster mushrooms yourself! I hope you get to bring some back home soon and savor their delightful texture.

If you have additional questions or comments to add, write them down below and let’s talk.