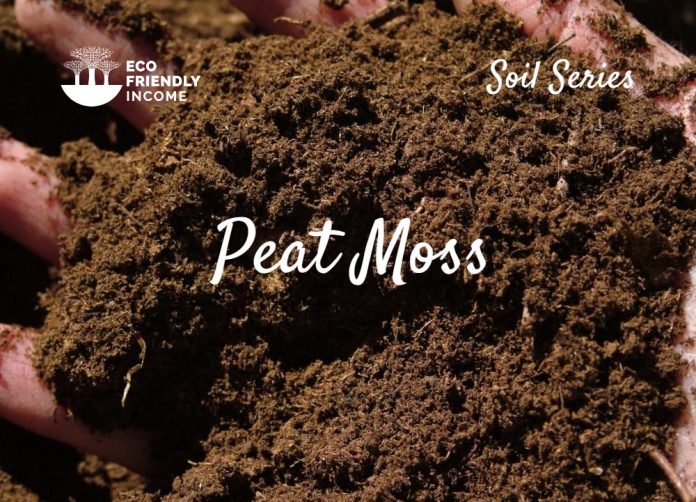 Every year, before the tree planting season kicks off, I work as a horticulturist at a garden center in Montreal.

At this point of the year (late April to May), the plants have barely come in yet, so we sell a lot of soil, peat moss, compost, and manure for people prepping their gardens and planters.

Peat moss by itself isn’t such a big seller, but it is part of almost any good soil mix you can pick up in a garden center.

In reality, people don’t really know what it’s good for, or even what it’s made of at the base.

This article will tackle these two questions and get into the juicy details.

Peat moss is made of organic matter that’s decomposed on the forest floor.

Year after year, plants that die, leaves that fall, pile up onto the forest floor, and slowly break down then decompose. The result of this is peat moss!

A combination of decomposed roots, moss, mycorrhiza, wood, and leaves.

Peat moss is good for its ability to hold moisture, which makes it an important part of every good soil mix.

It acts as a sort of sponge to hold not only water but also nutrients, preventing them from being washed away during heavy watering.

This is the main use you can get from peat moss, but it’s not the only one.

Here are 3 other uses for your peat moss:

Potting soil, for example, is usually made from peat moss, bark chips, and perlite (those small white rocks).

4. What Peat Moss Isn’t Good For

It is true peat moss is high in organic matter but it actually doesn’t contain very many nutrients, like a good cow or sheep manure would.

By itself, it won’t provide enough nutrients to help a plant grow into a solid one over time. In the short term, it’s alright but the plant will quickly use all the peat moss’s nutrients and become deficient.

Also by itself, peat moss can break down quickly, compress and prevent the soil from being properly aired. That’s why you want to add perlite because it won’t break down and will aerate the soil very well.

I’m gonna share with you some of the tricks I’ve learned as a horticulturist, hopefully, it will make your life easier when gardening with peat moss!

How do You Mix Peat Moss into Soils?

Peat moss when dry takes up a lot less space than when moistened, I recommend that you soak your peat moss first before mixing it into soils! That way, you will have a better idea of how much you’re putting in, volume-wise.

Is it Possible to Use too Much Peat Moss?

Since peat moss is acidic, you should be careful how much you put into your soil because it will increase the soil acidity, maybe beyond a level your plant is comfortable with.

I’d like to Use a Substitute for Peat Moss, What Are My Options?

There are plenty of other options for peat moss that are great substitutes, here are some great ones:

Can You Propagate Plants in Peat Moss?

Yes! It’s actually one of the best types of soil to use to start seeds or root cuttings.

Seeds need moisture to sprout, they don’t need nutrients right away, which makes the moisture-retaining peat moss a great seed starter to use.

Although it can create a good environment for mold to set into your cuttings, it’s recommended to mix it with sand and perlite for the perfect cutting mix.

A Not So Secret

Did you know? Peat moss is actually in almost every potting soil mix sold on the market.

Cow or sheep manure actually is mixed in with peat moss, so is shrimp compost, seed starter mix, lawn soil, vegetable & garden mixes, and topsoil mixes. It’s in all of them!

I think with peat moss, the true mastery of it comes down to knowing the perfect ratio to put into your soil mix.

There’s no golden ratio with peat moss though. Some plants prefer acidic soils that would require more while others may prefer dryer soil that will do better with less.

8 Plants That Love to Grow in Peat Moss

Plants that love peat moss will likely be plants that thrive in acidic, wet soils.

Think about it, in nature, plants that grow in peat moss are the ones generally native to peatlands.

For example, a large portion of the boreal forest is made of peatlands, which means many boreal forest plants will thrive in peat moss soils.

You could have some beautiful flowering plants like Rhodora & Bog Rosemary.

These are only a few, but among my favorite, since I’m based in the Boreal forest range, and these are beautiful, native plants we have up here.

Above all, they put the environment first when harvesting their peat moss.

Hopefully, this little guide has helped you understand more about peat moss, to finish, let’s have a little review!

So what is peat moss good for?

It’s good for moisture retention in soil, it loosens it up and provides acidity.

What is it made of?

Peat moss is made of organic material like roots, moss, mycorrhizae, leaves, and plants that have decomposed and piled up throughout the years.