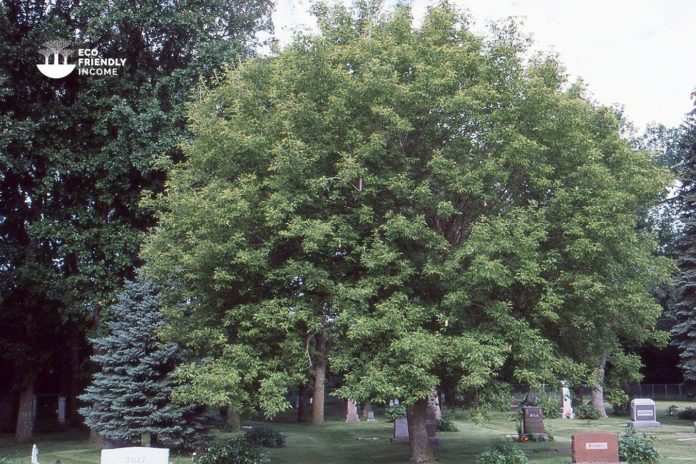 This guide is meant to teach you how to propagate Boxelder Maple (Acer negundo) and hopefully make it easier for you to sell them at your own nursery.

Boxelder Maple (Acer negundo) is a deciduous tree hardy up to hardiness zone 2. There are a few characteristics that can help you identify it.

Boxelder maple bark is smooth and greyish brown while it’s young then develops furrows or scaly ridges as it ages.

The leaves of boxelder maple are elliptical to egg-shaped, they have serrated margins, and grow in a pinnate structure of opposite arrangement (3, 5, or 7 leaflets each).

They are 2-6 inches long, green-colored above and paler below.

The flowers of the boxelder maple are small and greenish-yellow in color.

They are borne in dense clusters in the spring.

Boxelder maple (Acer negundo) seeds are small, dark brown, and kidney-shaped. They have a hard seed coat and a small amount of endosperm.

They are dispersed by wind and water and can remain viable for up to five years.

Boxelder maple is a tree that is found in many different habitats.

It can be found in wet areas, dry areas, and areas that are in between.

If you see the following species, there is a good chance Boxelder maple is growing nearby:

By itself, the species does not form pure stands.

Boxelder maples are often used for landscaping because of their vibrant fall colors and their ability to grow in a variety of conditions.

They can be used as a standalone tree or in a group planting.

If you look at their habitat range on the USDA Plants Map, Boxelder maple grows almost the entirety of the United States and Canada.

The lifespan of a boxelder maple tree is about 75-100 years.

They grow quite quickly but won’t live for very long unless under optimal conditions.

Boxelder maple has little to no commercial value for lumber, the wood is too soft.

Though it is useful as a landscaping tree on farms, as they make great windbreaks.

They are fast-growing, and their leaves turn a beautiful red in the fall.

The dense foliage provides good cover for animals, and the sweet sap is a favorite food of many species.

The leaves and fruits of the tree are eaten by a variety of birds, including the American robin, eastern bluebird, and northern cardinal.

The tree’s bark and branches are used by squirrels, rabbits, and deer for shelter.

The tender shoots might also attract big mammals such as deer and moose.

How to Propagate by Seed

You can always propagate boxelder maples by seed, that is if you have a tree nearby.

But if you can’t harvest seeds yourself, you can always buy them online at Sheffields.

Acer negundo seeds can be harvested when they are ripe, which is typically when the fruit turns from green to brown in the fall.

You’ll need to reproduce the natural process for the highest success with seed germination. Here’s how to do it in 3 easy steps:

After that, keep even moisture throughout the growth cycle (don’t allow it to completely dry).

When you get seedlings, give them some time then transplant in 6-12 inch deep pots filled with 1:1 sand/loam.

Alternatively, you can let nature do the work.

In that case, in the fall just place them in pots with compost/sand outside for winter. The only big enemy here is vermin, which might find your seeds and eat them all before spring comes.

When you do that, it cold stratifies itself outside and the seeds should germinate in the spring.

How to Propagate Boxelder Maple with Cuttings

Warning: Try to take your cuttings only from healthy, vigorous trees. Older trees lose their ability to regenerate over the years.

Timing is also key. You want to start your cuttings after blooms have disappeared entirely and new leaves appear fully formed.

The ideal time to take Boxelder maple cuttings ranges from the end of May to the end of August.

That’s it, that should have you covered to multiply your trees!

Got any questions or tricks to add? Don’t be shy to comment below and spark up a conversation!

Want to propagate like a pro? Check out our supreme guide to Plant Propagation.