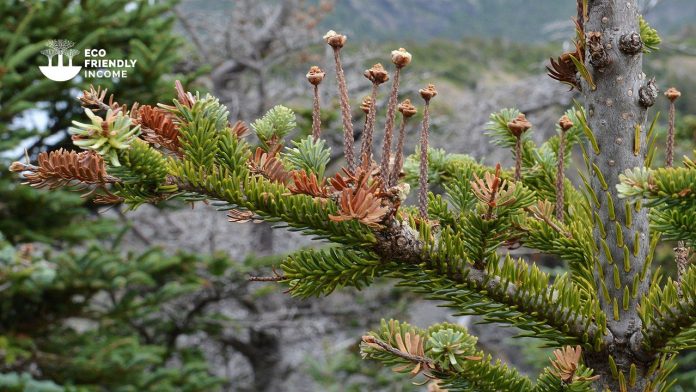 A field guide on how to identify and propagate Balsam Fir (Abies balsamea), a hardy zone 2 tree that is native to eastern North America.

Balsam fir leaves are needle-like and are typically about 1 to 1.5 inches long.

They are dark green in color and have a pointed tip. The leaves are linear-shaped, with entire margins, and have a spiral, alternate arrangement on the stem.

Balsam fir needles are fragrant, which is why they are sometimes used to make natural air fresheners or to scent holiday wreaths and decorations. They are also used in traditional medicine to treat a variety of ailments.

Balsam fir cones are small and oval-shaped, typically about 1 to 2 inches in length. They are green when they first appear, but turn brown as they mature.

The scales of the cone are smooth and rounded, and they overlap to form a cone shape.

You can spot balsam fir cones on the tree in the late spring or early summer.

The cones are typically ripe and ready to release their seeds by the end of the summer or early fall.

Balsam fir is a type of coniferous tree that is native to the boreal forests of North America. These forests, also known as the taiga, are characterized by cold, snowy climates and acidic, nutrient-poor soils.

Balsam fir is well-adapted to these conditions, and can be found growing in a variety of habitats within the boreal forest, including wetland margins, rocky slopes, and forested valleys.

You can find the tree growing in cooler temperatures, and in moist, well-draining soils. It’s often found growing in mixed stands of conifers and deciduous trees.

Balsam fir is an important component of the boreal forest ecosystem, providing habitat and food for a wide variety of mammals, and birds.

Balsam fir is an important species in the boreal forest ecosystem, providing habitat and food for a wide variety of plants and animals.

The tree’s needles are an important food source for many herbivores such as:

The cones are also an important food source for many animals, including birds, squirrels, and small mammals.

Balsam fir’s dense, fragrant branches provide a habitat and hiding place for many species of birds, which use the branches for nesting and the bark for roosting.

In addition, the tree’s roots help to stabilize the soil and prevent erosion in the forest ecosystem.

Overall, balsam fir plays a vital role in the health and diversity of boreal forests.

The best way to propagate balsam fir is by growing it from seed. Cuttings are possible, but much more difficult. If you are interested in learning more about plant cuttings, take a look at our propagation guide.

How to Propagate Balsam Fir (Abies balsamea) by Seed

You can propagate balsam fir by seed relatively easily. All you need to do is collect some cones to get seeds.

If you don’t have access to cones, you can always order seeds online at TreeSeeds.

Now if you got trees nearby, let’s look at the best way to harvest them:

Here’s how you can harvest seeds from balsam fir cones:

After the stratification period, plant the seeds in a well-draining soil mix and keep them moist until they germinate.

Q: What is balsam fir good for?

A: The tree’s main economic value is as Christmas trees, since balsam holds its aromatic needles indoors much longer than spruce. The aromatic foliage of Balsam Fir is also used to make balsam pillows. The resin has been used for medicine, turpentine, glue, and varnish.

A: Balsam fir has long been a preferred species for many consumers because of its strong Christmas tree scent. It has dark green needles and excellent form.

A: Yes, it’s native to the forests of eastern Canada. You can find it growing from the Newfoundland Highland forests, through the Canadian Shield Taiga, West to Interior Alaska Yukon lowland & the Cook Inlet Taiga.