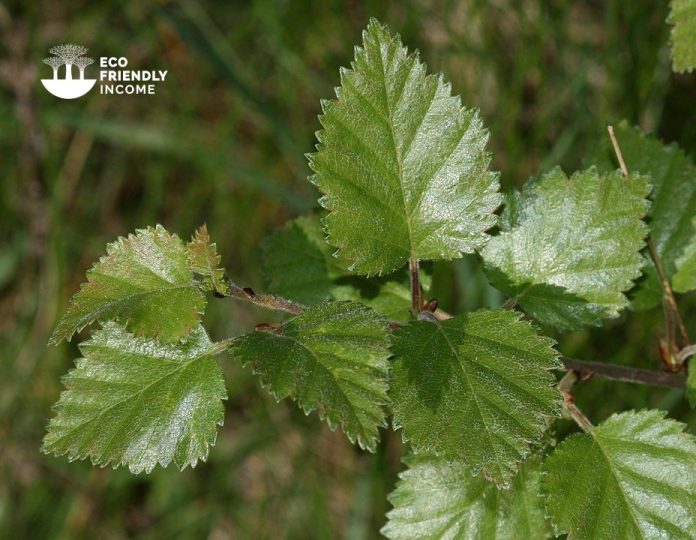 A field guide on how to identify and propagate Downy Birch (Betula pubescens), a hardy tree that is native to Europe.

Downy birch leaves are ovated shaped, with serrated margins, and grow in alternate arrangements along the stems.

The fine hairs on the young twigs of this tree give them a soft edge, particularly when viewed with the light behind them, which is where the tree gets its name of “downy”.

The bark of the tree has a greyish-white hue, similar to that of the silver birch, and is marked with horizontal grooves. Betulin, a chemical, is responsible for the white color of the bark.

You can see both male and female flowers (catkins) on the same Downy birch: the male catkins form in autumn, staying on the tree through winter and opening in April or May, while the female catkins appear in spring among the new shoots.

The wind disperses the seeds, which are tiny nutlets (only 2-3mm across) with two wings that help them travel up to one mile from the parent tree.

The female catkins, where the seeds develop, disintegrate in September and October, releasing the seeds. Each year, one tree can produce many thousands of seeds.

You can find downy birch growing in moist sites like bogs, along riversides, and streams, but also in open woodlands and heaths.

It can grow well in acidic soil and even in high elevations.

Downy birch has a light, open canopy that is ideal for a variety of plant species to thrive, including grasses, mosses, wood anemones, bluebells, wood sorrel, and violets.

They are also a source of food for over 300 insect species, such as aphids, ladybirds, and caterpillars of moths, as well as being a food plant for a number of fungi.

Moreover, woodpeckers, other hole-nesting birds, small mammals like dormice and wood mice, and some seed-eating birds rely on birch woods for their sustenance.

You can propagate downy birch with two effective methods:

Personally, I’ve really struggled to get birch cuttings to root, on the other hand though, seeds have always been very easy.

For that reason, I’ll focus solely on seed propagation.

To be sure that you have a downy birch, look for the following characteristics:

P.S. The time to harvest downy birch seeds is in Autumn, around late September to October.

Don’t let the seeds dry, you can store them in the fridge with some moistened sand to keep them viable until spring or you can plant them right away.

Downy birch seeds, like other birch species, can be easily broken out of dormancy with just light and water. They don’t need a cold stratification.

Surface sow them right away in well-draining potting soil in a seed tray or pots. Place in a well-lit area, light is important to break dormancy.

Water the soil, and keep it moist until the seeds germinate, which should take about 1-2 weeks.

Once the seedlings are large enough, transplant them to a permanent location in your garden or yard.

Downy birch prefers moist, well-draining soil, so be sure to plant it in an area that gets plenty of water.

By following these steps, you can successfully propagate downy birch and add this attractive, low-maintenance tree to your landscape.

Q: How do I care for young downy birch trees?

A: Young downy birch trees should be planted in a location with well-draining soil and plenty of sunlight. Water the tree regularly, especially during dry periods, and fertilize it with a balanced tree and shrub fertilizer according to the manufacturer’s instructions. Prune the tree to remove any damaged or diseased branches as needed.

Q: What is Betula pubescens used for?

Q: Where can I find downy birch?

A: Found in a variety of habitats, the Downy birch is a slender tree with slender branches and fragile bark. You can find it on heathland, moorland, mountainsides, and even in damp soils.

Q: How tall is a downy birch?

A: Mature downy birch trees can reach up to 30m in height.