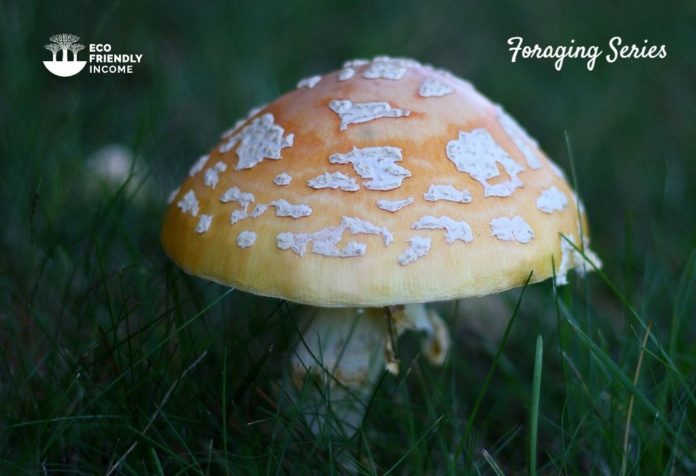 These are very easily the most recognizable mushroom you can forage. Fly agarics are ingrained in folklore, history, and culture worldwide.

I’ve been a tree planter for many years now, I’ve had the opportunity to see Amanita muscaria numerous times. At first, you can’t believe your eyes, is that what I think it is? It’s the mushrooms from Mario bros!

They are near impossible to miss in the forest, with their vibrant color and trademark white spots.

I think any mushroom lover has seen them before, but over time we become curious, don’t we? What exactly is this mushroom some say has magical properties?

Well, curiosity got me and now I have some experience with this mushroom myself.

So I decided to share my knowledge about North America’s version of Fly Agaric: Amanita Muscaria var. Guessowii

In this guide, you can expect to learn the following:

Fly agaric, Amanita muscaria var. Guessowii, (the North American species) fruit from the end of July to the end of September sometimes past that, depending on the weather.

Although keep in mind that microclimates in your area affect the fruiting season, for example, you could find them earlier or later than that.

Factors like rainfall and weather affect when fly agaric mushrooms start to fruit. A good week of rain is always beneficial for any mushroom to spawn.

The general conclusion here is that amanita muscaria is a late summer to fall fruiting mushroom.

Fly agaric mushrooms start to fruit from a bulb or vulva that comes out of the ground. This round ball is where the mushroom body ultimately sprouts from.

This juvenile growth stage is what gives amanita muscaria the white spots on the cap. They are the remnant of the white, dusty powder from the bulb’s top.

As they grow into the adult mushroom shape, a veil that attaches the cap to the stem breaks and leaves a skirt along the stem. This is a feature common amongst all amanita species.

The caps can grow as wide as 20cm and stems as high as 25cm tall. Mature fly agaric cap edges begin to curl outward as the mushroom ages.

Amanita muscaria var. guessowii has fine white gills under the cap that stop abruptly as they merge with the stem.

The bulb of the juvenile stage stays with the mushroom its whole life, leaving a ball where the mushroom is attached to the ground.

There are other amanita species you could get confused with.

Amanita muscaria can lose its color with enough rain and time, so there’s a potential that you could mistake it for another species of amanita. It’s important not to mistake them because many other amanitas are toxic and will destroy your liver!

Amanita smithiana is an example of another amanita species. Its characteristics are nearly identical, except for one thing:

Really, you can’t go wrong with amanita muscaria if you rely on its color. The yellow ( var. guessowii) and red color amanita are the only ones you should harvest.

So I recommend you only pick the amanita you see that still has its vibrant color, this way you cannot mix them with another potentially toxic sister species.

None of the red or yellow varieties of Amanita contains the lethal hepatotoxic (liver-destroying) amatoxins.

Despite that, it’s still recommended to go through a special preparation process before eating them.

Where You Can Find Amanita Muscaria var. Guessowii

This species of amanita is found growing in North America, mostly on the east coast.

It’s a mycorhizal species of mushroom, which means it forms bonds with the trees and plants growing around it.

They create vast underground networks of rhizoids that connect to trees and exchange nutrients. These relationships with trees are mutually beneficial, a symbiosis.

They associate with all sorts of trees, as much with conifers as with deciduous. Common associations are pines, birches, and spruces.

They spawn from those rhizoid networks at the forest floor level, usually coming up through leaf litter.

A mushroom species associated with fly agaric are porcini mushrooms (Boletus edulis). They are often found growing together in the same area.

The psychoactive effects of amanita muscaria can be experienced in different ways: Some people will prepare the mushroom first then make a tea with it, while others will smoke it.

Indigenous people of eastern Siberia used Amanita muscaria for its psychoactive attributes. It was used, alternatively to drumming and dancing, to achieve a trance-like state.

While these chemical compounds have effects on the brain and body, they are toxic to a degree. Proper preparation and dosage is important.

4 Science-backed use of Amanita muscaria:

This was my exact reaction to amanita muscaria. When I woke up, it was nearly 8 hours later, and I had a slight headache. My dreams felt like a long adventure, my body and mind felt worn.

I got up, made supper, and went back upstairs to sleep again.

Now when I woke up the next morning (I had my vivid dreams during the afternoon) I felt really rejuvenated! Much more than after a normal night of sleep, kind of like a new body type of feel.

Looking at various other experiences, this seems to be a common effect of amanita muscaria. I’d say my experience is what normally happens, and what you can expect from it.

It’s not something I would do often, but in a way, that long journey in my dream had some meaning. I wouldn’t recommend amanita muscaria to anyone unless they really need it.

Although I could see this being helpful for someone who’s totally worn out from work. Amanita muscaria is really useful to disconnect during a weekend and come back rejuvenated.

How to Prepare, Clean and Store Amanita Muscaria Mushrooms

Before you prepare them, you need to clean the mushrooms. As a general rule of thumb, not just with Amanita but any other mushroom, you don’t want to run water on them.

If you take your mushrooms to the sink and clean them in running water, they will absorb water and puff up. Then it’ll take much longer to dry.

What you want to do is take a clean hand cloth and gently rub off any dirt from the Amanita. A clean little brush is also handy to get into the cracks. That’s really all you need to do, they will dry much better if they’re not wet.

How to Dry Amanita Muscaria

Storing amanita muscaria mushrooms correctly is important to keep them in good condition. You never want to store them in a sealed plastic bag or sealed container before they’re dried.

The best option is a brown paper bag in the fridge until you’re ready to dry them. Doing this will ensure you control the moisture and prevent any molds from growing.

Part of the preparation process of amanita muscaria is decarboxylation: converting ibotenic acid into muscimol. The drying process is the first step to this and brings the conversion to 30%.

Here’s how you want to dry your amanita muscaria:

You can use an oven or a dehydrator, what’s important here is the temperature. The general drying temperature to hit is from 70C to 80C. Optimal is at 72C.

This temperature will actually convert the ibotenic acid, anything higher might destroy the cell walls and your mushrooms will turn to ooze.

Dehydrator: Warning: Cheap dehydrators are not reliable, they might actually not bring the temperature to the exact degree you need. If you do this with a dehydrator, make sure it’s a quality one that will give actual temperatures.

You want to dry them until they become cracker dry.

Check this video for more details: Dehydrator vs. Oven?

How to Prepare Amanita Muscaria

This is info from Amanitadreamer, she’s among the most knowledgeable Amanita muscaria expert you could find.

When you prepare them, you also want to pick amanitas from different batches of dried mushrooms, this way your dosage will be spread out. Some wild mushrooms are more potent in ibotenic acid than others.

Start with a 15g batch, but keep your ingested dosage low. The smaller the dose, the better the experience.

Here’s how she prepares them:

Adding the correct heat to amanita muscaria will change their chemical composition and make them safe to ingest. It converts the dangerous component, ibotenic acid, into muscimol, the psychoactive ingredient.

First, when you dry heat them, you convert 30% of the ibotenic acid into muscimol.

Then, when you boil them here, it converts an additional 30% of the ibotenic acid into muscimol, bringing to a total of 60%.

How to Preserve Your Amanita Tea

With a batch this large, you will only use a small amount, which means you’ll have to store the rest.

If you put it like that in the fridge, it will go bad before you use it again. The best way to store it is to split it into smaller doses and freeze each one.

You can get small quart-size tubes and fill each one to the level you want, then preserve in the fridge indefinitely!

60% conversion of ibotenic acid into muscimol is a good balance, but you could convert it even higher to 90% with lemon or lime. Check out how here: Lemon Tek

If you have additional questions about Amanita muscaria var. Guessowii, or want to add anything, leave a comment down below.